Though she is young, Danielle Harris is a legend as far as I’m concerned. Danielle’s involvement in four HalloweeN films warrants her a special place in the hearts of the franchise’s fans. Her role as Jamie in 1988’s Halloween 4 was memorable and intense; it demonstrated talent and wisdom beyond her years.

Danielle’s performance in Halloween 5, along with that of Donald Pleasence’s, saved that abysmal film from being completely unwatchable. I also appreciated her work as Annie in Rob Zombie’s recent HalloweeN duology. Danielle came off as a cool and in-control acting veteran in those films. 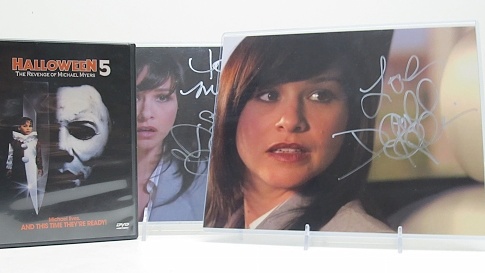 Her autograph is very distinctive and unique; it’s a work of art in itself. It has great curves, a heart and is very girly (I’m still talking about the autograph). The autographed still featured here is from the movie Cyrus: Mind of a Serial Killer (2010), in which Danielle played a Latina who works as an investigative reporter. A review of Cyrus is available here as an accompaniment to this article. 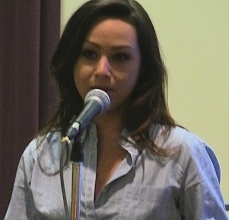 When I met Danielle, we hugged, chatted and shared many laughs. She has silky-smooth hair, gleaming brown eyes, seductive smile, mesmerizing lips, smells great (ok this is getting creepy now). Though Danielle is a certified hottie, she is totally approachable, upbeat, engaging and attentive.

Lance Henriksen, Danielle’s Cyrus co-star, remains the coolest and most giving celebrity I’ve ever encountered, but Danielle is right up there, too. I love her to bits; she’s a splendid person and a wonderful actress.