This second entry in the Myers Techniques series serves to prove that what Dr. Loomis saw in Michael Myers’ eyes was indeed pure darkness. There is definitely an inhuman quality to stabbing someone from behind and then raising them up off their feet with one arm. This method demands great physical power from Michael and it speaks to his diabolical nature. 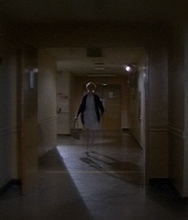 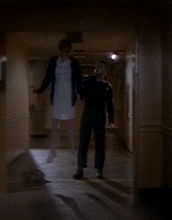 Thanks to Dr. Mixter’s exceptional, sober and professional treatment, Laurie saw the nurse in a blurry haze. Michael’s knifing and lifting of the nurse may have all been a product of Laurie’s drugged-up mind. However, the nurse’s shoes fell off (the prop department didn’t have her correct size) after she left the ground and that occurrence was not viewed from Laurie’s perspective. The stabbing and raising were real. Myers had done the unthinkable.

Fast-forward 20 years from that fateful night to Halloween: H20. Laurie is now battling drugs of a different kind (alcohol and sedatives – is she still under Dr. Mixter’s care?). In the school, Laurie consoles her son and his girlfriend (Michelle Williams) after a fast-moving Michael Myers with rapidly changing masks attacked them. Will, Laurie’s boyfriend saw someone approach from the down the hall. He took Laurie’s gun and unloaded.

LL Cool J was shot in the head and knocked out. As Laurie and Will checked out the blood spilling from LL’s dome, Michael Myers appeared out of nowhere. Myers thrusts his knife into Will’s spine. Will twitched and convulsed, while the veins in his forehead were about to burst as Myers used his knife to lift him up with one arm. 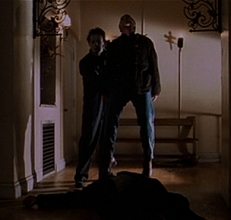 As Laurie backed away at the sight of history repeating itself, Myers turned to look directly at his sister. Myers wanted to let Laurie know that he also remembered the nurse from decades ago. At Monster-Mania 20, Chris Durand, who portrayed Michael Myers in H20, described that scene as a stare-down. It was meant to show Laurie that the nightmare was not over.

The Knife In Back Lift is one of Myers’ more memorable and disturbing kills. When he first used this tactic in Halloween II, the message was clear – Michael Myers was everything that Dr. Loomis feared he was.