Review – Halloween: The Changing Shape of an Iconic Series 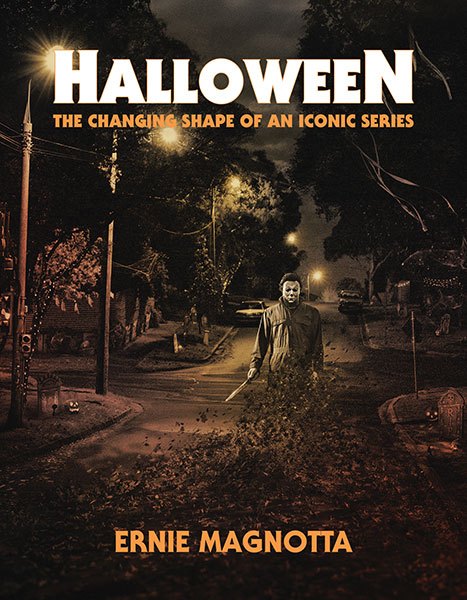 Author Ernie Magnotta has recently treated us to a new book on the Halloween franchise.  If you’re not yet familiar with the book’s premise, you can get the scoop HERE

At first glance, I was surprised and delighted by how large the book is.  I expected more of a trade paperback-style format, but this is a very nice coffee table offering.  The type and photos are all at a perfect size for comfortable reading and viewing.  You’ll want to be sitting at a table or have a pillow on your lap if you expect to be reading for long periods.

Right away, we are greeted by the cover painting by “The Mad Butcher” P.L. Boucher.  I really like the look and composition of the piece and it sets the perfect tone for the book we’re about to open.  The first main text we encounter is the wonderful “Black cats and goblins…” poem from H1.  This is a cool touch Magnotta guides us in with, and it lets us know we’re in for a treat.

Normally, I don’t give a ton of thought to acknowledgements sections, but here we’ve got a passage that is very thoughtful and heartwarming.  Ernie writes the kudos here with a directness and personality that foreshadows the prose style of the rest of the book.  It feels very much like we’re reading an essay inspired by the author’s passion, rather than a typical nonfiction book.  Magnotta doesn’t impersonally dictate facts to the reader, but rather chats with them casually and really drives home the fact that we’re engaging a fellow fan.

It bears mentioning that this is absolutely not a “how-it’s-made” book à la Crystal Lake Memories, but more of an analysis and dissection of the storywriting, character development, cinematography, and themes of each entry in the Halloween franchise.  All of this is presented in a highly personal manner and we are reminded throughout by the author that these are simply his opinions.  For me, this format is an asset.  We are all so familiar with the details and anecdotes from the series, so it’s a little refreshing to read a discussion of the more technical aspects, inner workings, and functions of the films.  I tore through this thing in a few days because it’s so easy to read despite us being hit with so much information.

Ernie has dabbled in filmmaking and has taken film classes as well as writing screenplays and being an overall student of what makes a movie tick. It’s with this eye that he captures the sentiments and observations translated into this book. Magnotta goes beyond simply explaining why we all think Halloween is so great by appreciating how it’s so great.  There were several moments in the book in which I said, “oh yeah!” and recalled things that aren’t burned into the memory quite as deeply as, say, the iconic head tilt from H1.  The author points out tricks employed by the filmmakers that we may not have consciously noticed but rather felt, perhaps.

It’s imperative to remember that Magnotta isn’t necessarily reviewing each film installment inside a vacuum, but comparing them to the original using specific criteria outlined in in the first few chapters.  Die-hard fans of the sequels may grimace at some of the blunt – and often funny (to me) – criticism of their shortcomings.  A heavy bias toward the 1978 classic is apparent throughout, but given the subjective nature of the book this is understandable.  The exclusion of a segment on 1982’s Halloween III is appropriate in my opinion, as it would be ludicrous to compare it in any way to Carpenter’s original film for obvious reasons.

It’s only natural that we may disagree with some of the observations and theories presented by Ernie in this book, but that’s part of the charm of it for me.  Reading through these chapters opens up a dialogue and helps to further the discussion of what brings us creeps on Michael-Myers.net together in the first place.  Magnotta dearly loves The Shape and the gift that John Carpenter gave us all forty years ago, and it couldn’t be more obvious.  Long live Myers and long live the fans.