The complete Michael Myers saga is preparing for release soon to Blu-ray. Let’s take a look back to Rob Zombie’s re-telling of the HalloweeN story and the ways it was released to DVD and Blu-ray in North America. Rob Zombie’s Halloween (2007) gave us a new Michael Myers (played by Tyler Mane) and a new Mask. It also brought veteran actors (such as Malcolm McDowell, Dee Wallace and Brad Dourif) into the HalloweeN franchise alongside new talents (like the lovely Kristina Klebe). And, it goes without saying that we all enjoyed having Danielle Harris back. 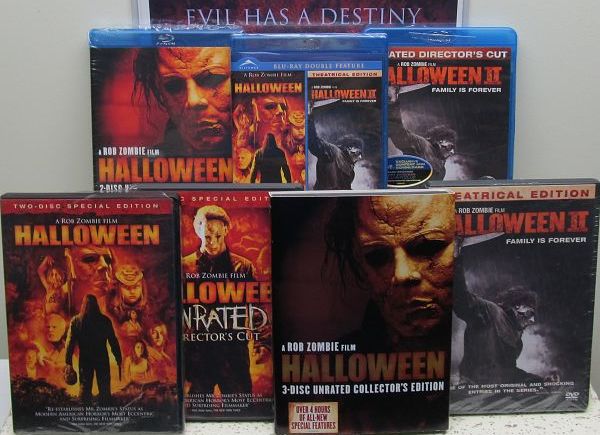 In 2007, movie fans and information geeks were able to follow the creation of Rob Zombie’s Halloween very closely. Zombie himself revealed the entire cast via his MySpace page. Even as the film was being shot, there were many tales about what was going on. There were rumors that the dialogue in the script relied on excessive profanity. Prototype artwork and posters were released. There were stories that Michael Myers wouldn’t be like he was in previous movies – that Myers would be more agile and less robotic, more human and less supernatural.

Before the movie was officially released to theaters, a nearly completed “workprint” version of the film was leaked online. Information about the making of Rob Zombie’s Halloween was available to anyone who had the time to look for it. In this respect, Zombie’s Halloween from 2007 was unique. No one had to read Fangoria or needed to have industry contacts to find out the latest about the new Halloween. Most of the reliable news was on the Internet, on forums such as Michael-Myers.net. Zombie’s Halloween was one of the first major studio films of the Internet age. Most aspects relating to the movie’s development were available at an instant. 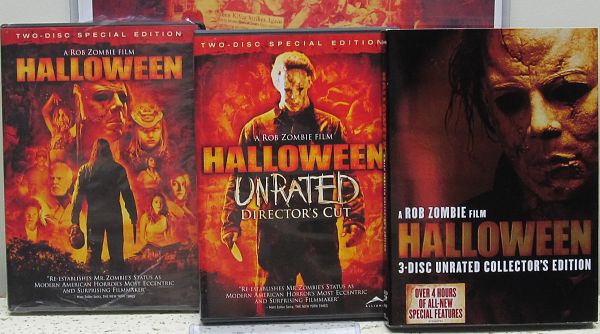 Presented here is Zombie’s Halloween after its theatrical run. When Halloween made its debut on DVD in December of 2007, it wasn’t much of a surprise that two versions of the film were released. By the time the DVDs were announced, fans had already watched the film in theaters and had seen the bootlegged workprint. They knew that both versions were quite different.

The Theatrical version was released as “Halloween Two-Disc Special Edition” on DVD. The version that was different from the Theatrical and that contained elements of the workprint was named “Halloween Unrated Director’s Cut: Two-Disc Special Edition.” Each version featured different cover art. If you were a HalloweeN fan in 2007, you would’ve wanted to get your hands on both of these DVD releases. (In the U.S., a Hot Topic Exclusive version of Halloween Unrated Director’s Cut came with an “Authentic Rob Zombie Autograph”).

Both Halloween and Halloween Unrated Director’s Cut have the same special features on the second disc. On the first disc of both editions, you get the feature film plus a great audio commentary by Rob Zombie. Obviously, portions of Zombie’s commentary vary for each version of the film. Interestingly, the Theatrical version of Halloween comes in both widescreen and full-screen versions. This feature is absent from Halloween Unrated Director’s Cut. 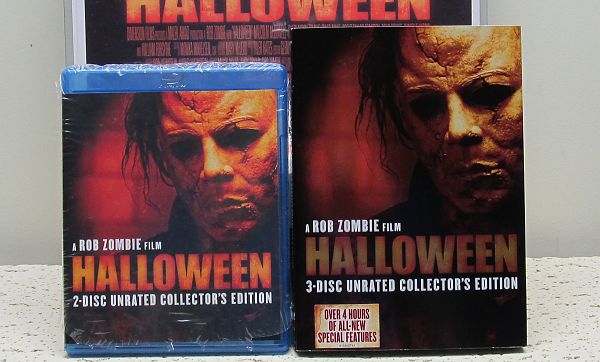 In October 2008, Rob Zombie’s Halloween was re-released as “Halloween 3-Disc Unrated Collector’s Edition” on DVD (and “Halloween 2-Disc Unrated Collector’s Edition” on Blu-ray). Even though it came with new artwork, the main draw for this new edition was the new 4 and a half hour long documentary on the making of Halloween. You can only obtain this massive documentary by buying this re-release, it’s not available separately.

The Unrated Collector’s Edition DVD came with a cool slipcover of the different artwork, which focused on Michael Myers’ mask. The Blu-ray Unrated Collector’s Edition didn’t come with a slipcover. If you were a HalloweeN fan in 2008, you would’ve wanted to get your hands on this new release on DVD or Blu-ray – mainly for the new documentary. The completist would have wanted to pick up the DVD (in addition to the Blu-ray) just for the slipcover.