Five years have passed since the last HalloweeN film. The most recent movie in the franchise is Rob Zombie’s Halloween II. Before its theatrical release in August 2009, Halloween II already faced criticism from many fans. Rumors alleged that Michael Myers would not be wearing his iconic mask for most of the film. There were stories about a horse appearing throughout the movie. It also became known that Sheri Moon Zombie would be starring in Halloween II although her character, Deborah Myers, died in part one. 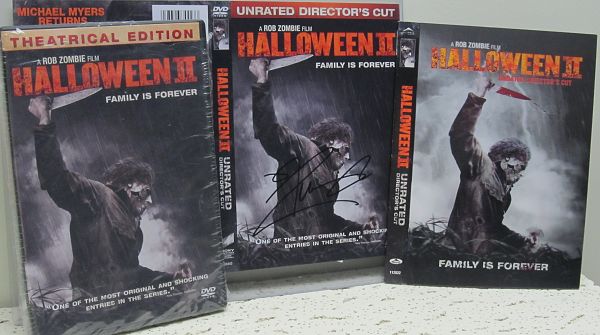 A full-length trailer for Halloween II showed Michael Myers encountering a small child and lifting a car. In some promotional spots, Dr. Loomis stated that, “Michael is more evolved,” a line that was said in a different context in the movie than in the teaser. More troubling was that the trailer was essentially a summary of the film’s plot. It gave away such details as: the moment when Michael came back to life, Laurie Strode’s psychological instability and her finding out that she’s the sister of Michael Myers, and the survival of Loomis and Annie after the events of Halloween (2007).

Despite the above concerns, Rob Zombie’s Halloween II is a sequel that tried to offer what most horror sequels don’t. Halloween II has character development, even for Michael Myers. H2 also showed us both the immediate and long-term consequences of extreme violence. The scenes where the medics are tending to Laurie after her confrontation with Myers are very well done. Lynda‘s dad is shown as a man who has turned his grief into desperate rage when he confronts Dr. Loomis with a gun. Meanwhile, by penning a second book on Myers, Loomis has become so reckless he’s as much a danger to the characters in this story as Myers is. 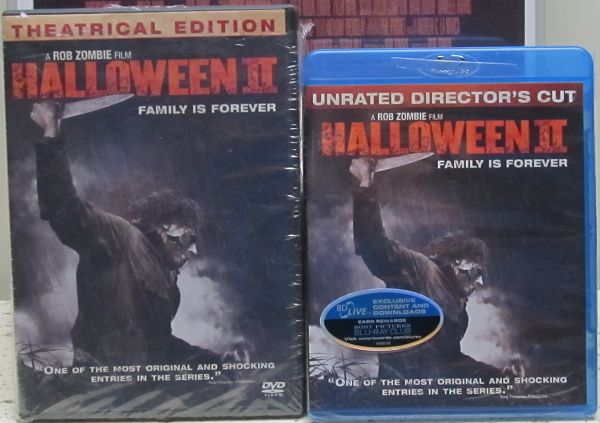 As with his first Halloween, Rob Zombie made available two versions of Halloween II to North American DVD and Blu-ray in January 2010: The Unrated Director’s Cut and the Theatrical Edition. Both variations have the same cover art (whereas each of the two variations of H1 had their own respective artwork). Both cuts of H2 were single disc releases (H1 was released as a double DVD).

The graphics on the DVD disc for both versions of H2 look like they were made with LightScribe (the discs for H1, on the other hand, had color images printed on them). Judging by presentation alone, one could conclude that less time and care went into preparing H2 for the home video market (not to mention H1 was also re-released in an expanded Collector’s Edition).

Rob Zombie’s commentary track for H2 is less enthusiastic and less informative than the one he provided for H1. The commentary for H2 is downright lazy at times, with Rob Zombie simply describing what is happening on the screen. For example, when Myers is shown walking, Zombie says, “Here’s just more shots of Michael Myers walking.” When Laurie is shown returning to Sheriff Brackett’s house at night, Zombie states, “Back to the Brackett house at night. Laurie comes rushing in.” 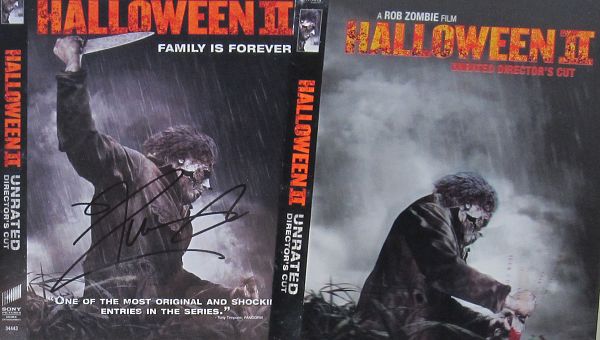 Regarding the different endings for the H2 Theatrical Edition and the Unrated Director’s Cut, Rob Zombie comments, “Why we went back and changed the ending I’ll never know. I still think the original ending, which is on the director’s cut, is the right ending.” With that statement I would humbly agree. The Unrated Cut‘s conclusion is dramatic and provoking.

Rob Zombie’s Halloween II is derided and it is considered a travesty by some. I could’ve done without the prolonged sequences of Scout Taylor-Compton and her friends at the Halloween party, but H2 is not a low-point in the franchise. Rob Zombie’s H2 is a more worthy HalloweeN film than Halloween 5: The Revenge of Michael Myers and Halloween: Resurrection.

The Unrated Director’s Cut of H2 was released on DVD and Blu-ray. Some of the DVDs for H2 Unrated came with a lenticular slipcover showing Michael Myers stabbing away. The Theatrical Edition and its bonus features, however, only made it to DVD. The Theatrical Edition of H2 isn’t even included on the upcoming Halloween: The Complete Collection Blu-ray set.

If you really want the H2 Theatrical Edition on Blu-ray, then there is the Rob Zombie’s Halloween & Halloween II Blu-ray Double Feature released by Alliance Films in Canada. This Blu-ray disc contains the Theatrical Editions of both of Rob Zombie’s Halloween films, but not the special features. It’s not often that Canada gets any exclusive releases (or slipcovers. Plus, when it comes to ordering from the U.S., Canada gets treated like it’s anything but a country that is right beside the U.S. Shipping to Canada should not be like shipping to Antarctica). This Alliance Films Blu-ray is a welcome addition for completists.