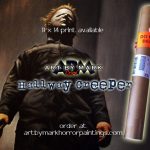 Art by Mark (Artmark as he’s known here at Michael-Myers.net) is offering his most recent oil painted Michael Myers work in print form! The artwork is titled “Hallway Creeper” and is inspired by HalloweeN II. Visit Artmark’s website at: http://www.artbymarkhorrorpaintings.com

Alone In The Dark with Dr. Loomis and Jason Voorhees

Alone in the Dark (1982) has a dream team cast. It stars three legendary actors: Jack Palance, Donald Pleasence and Martin Landau. This movie, directed by Jack Sholder, came very close to adding another noteworthy feature. One of its characters, a psychopath called Bleeder, wears a hockey/goalie mask to hide his face. Bleeder murders someone by raking him across the … Continue reading →

* We start the show off with talk of Cabin Fever: Patient Zero and a possible remake of another classic Alfred Hitchcock film. * After a break we talk to a true master of horror, Tom Holland! He is an awesome guy and gives great insight about Psycho II, Fright Night, and so much more! * In the final segment, … Continue reading →

As a lot of horror film and Halloween fans know, John Carpenter, creator of the Halloween series took the third instalment in a completely different direction to the previous two films. Halloween (1978) and Halloween II (1981) are a back-to-back double feature in their structure, as the sequel continues the events of one Halloween night. But Carpenter wanted to make a series of episodes … Continue reading →