Released in late 2012, these editions of the aforementioned HalloweeN films are referred to as “mediabooks.” Mediabooks are sort of like the limited edition digibook packaging that some movie titles come in. However, these Austrian mediabooks go a step or two further. 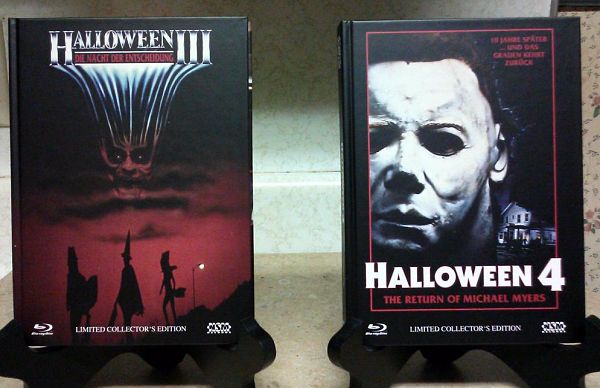 Each of these HalloweeN mediabooks features 3 discs: a Blu-ray disc of the film, the DVD for the film and the audio CD for the movie soundtrack. These mediabooks can be found at D&T Mail Order, a company based in Austria.

DarknessBDJM has offered us a breakdown of what to expect from these HalloweeN titles. The HalloweeN 4: The Return of Michael Myers mediabook Blu-ray looks significantly better than the Anchor Bay version released in North America. The brightness levels of the film are superb and the reds aren’t unnaturally saturated. The contrast and cinematic look of the movie also seem better than the Anchor Bay release. 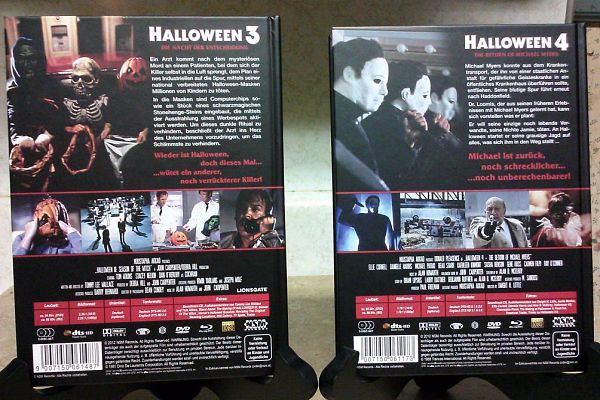 If you haven’t picked up Anchor Bay’s Blu-ray of H4, then consider getting the mediabook. The presentation of H4 on the mediabook Blu-ray is far superior and more detailed than that of the Anchor Bay BD. Included in the mediabook Blu-ray of HalloweeN 4 are the 5.1 audio track and the 2.0 audio track (which was not on the Anchor Bay disc) both in DTS HD-MA. Also of note is that the Austrian mediabook of H4 includes all 3 audio commentary tracks that have been recorded so far. Anchor Bay’s BD release of H4 only included 2 commentaries (it left out the one by writer Alan B. McElroy). 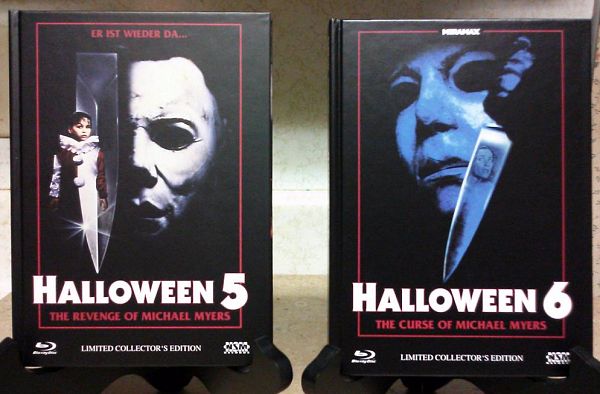 The presentation of HalloweeN 5: The Revenge of Michael Myers looks slightly brighter on the Austrian mediabook than it does on the Anchor Bay release. The DVD disc of this particular title seems to be of about the same quality as the H5 Divimax DVD and the DVD included with the Limited Edition tin box. The H5 mediabook has both 5.1 HD and 2.0 HD English audio tracks (the latter is missing from Anchor Bay’s editions of H5).

The packaging for HalloweeN 6: The Curse of Michael Myers features cool behind the scenes and promotional photos (such as one taken from the Producer’s Cut showing Jamie stabbed). The H6 mediabook uses the same Studio Canal master that the Spanish and French discs do. However, the H6 mediabook presentation of the film doesn’t look as good as the French release (which seems to be the best version of HalloweeN 6 on home media yet). 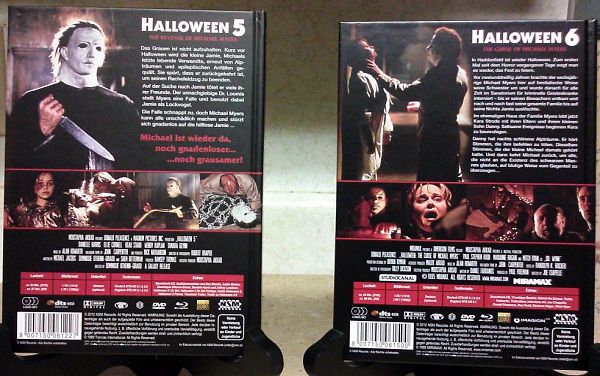 Many thanks again to DarknessBDJM (for providing the technical details of the mediabooks) and to m1k5  (for supplying the wonderful photos of these items). While I am prone to buying the same title more than once or twice (for whatever reason), I regret picking up the Anchor Bay Blu-rays for H4 and H5. Although I got the Blu-rays for $10.99 each, they are what they are: cheap product. The mediabooks are a much better concept (plus there are alternate covers to choose from). Just the sweet packaging and the included CD soundtracks are worth more than $10.99.