In this edition of Odd Reactions by Michael Myers and other HalloweeN characters, we examine two different scenes in the HalloweeN franchise. The scenes presented here come to us from the films HalloweeN II (1981) and Halloween 5: The Revenge of Michael Myers (1989). Let’s see what we’ve got.

Various readers of the Michael Myers blog had previously commented that Sheriff Brackett’s reaction to his daughter Annie’s death was literally unbelievable. It was a rather abrupt end to Sheriff Brackett’s character since he disappeared from the story right after that scene.

During HalloweeN II, Dr. Loomis convinced the sheriff of the evil of Michael Myers. Sheriff Brackett spent the night of Halloween 1978 patrolling the streets of Haddonfield. Unbeknownst to Brackett, his daughter Annie had been strangled to death that same evening by Michael Myers. Her body was subsequently displayed on a bed in the Wallace house. 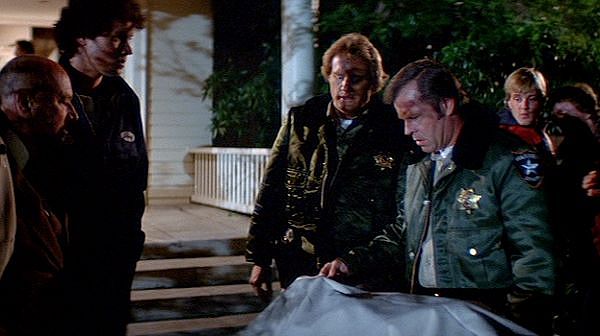 Brackett was informed of the tragedy by Deputy Hunt. Upon arriving at the Wallace house, Loomis, Hunt and Brackett witnessed a body being carried out of the residence. Without anyone telling him whose body it was, Brackett walked over and calmly pulled back the white sheet that covered the corpse. It was Annie. The Sheriff grimaced and calmly closed Annie’s eye lids. 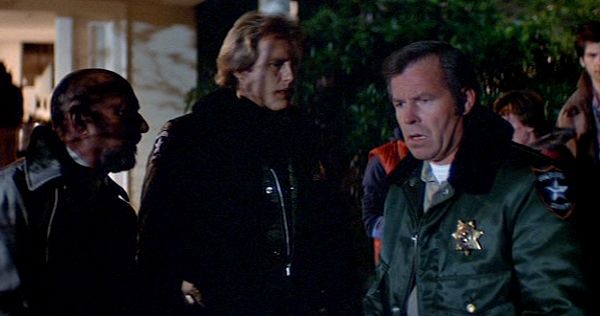 After the paramedics wheeled Annie away, Bracket had a troubled look on his face. However, he wasn’t in shock or in too much of a daze. Brackett mentioned his wife, and this reveals that he was thinking clearly (given the devastating situation). His body language also serves as evidence of his unaffected state. Brackett kept his arms to his sides and he stood in a normal posture (he wasn’t slumping or tensed up). Furthermore, his speech wasn’t all that affected either. He didn’t stutter when he spoke and his voice didn’t break. Brackett didn’t convey panic or worry. He didn’t look like he was going to lose his composure.

From this state of relative ordinariness, Brackett suddenly looked at Dr. Loomis and said to him, “Damn you… what have you done? You let him out!” Then Brackett walked away. One would’ve expected Brackett to try to assault Loomis or to have some other outward emotional reactions. But no.

This peculiar response could be explained by Sheriff Brackett’s degree of professional detachment. However, how many savage crimes could Brackett have seen up to this point in a sleepy town like Haddonfield in order to have such a cold and uncaring outlook on things? Brackett reacted like anything but a father who had just seen his slaughtered daughter going out on a stretcher.

HalloweeN 5 tried miserably to establish Michael Myers as a tortured soul, a victim of evil rage. To this end, the film’s director showed Myers crying without his mask on (…then they showed Myers in a jail cell with his mask on… huh?).

Michael Myers was crying because he could not control his homicidal impulses and actions. The filmmakers wanted us to believe that Myers was a human being like anyone else and that he had been the real victim all along.

Throughout HalloweeN 5, Michael Myers had little to no character development. He didn’t seem like a suffering soul when he killed the well-meaning Hermit who had taken care of him. In fact, he didn’t elicit sympathy when he murdered anyone else in this movie. If anything, Myers seemed to be more brutal than he was in HalloweeN 4: The Return of Michael Myers. 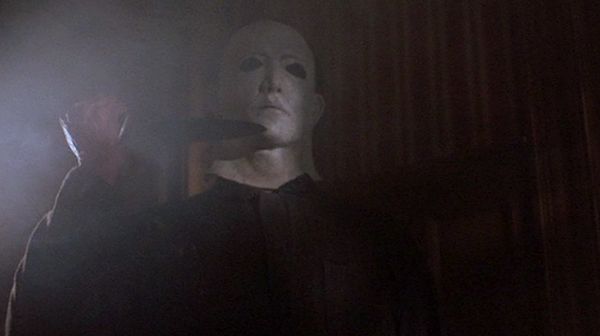 Michael Myers may have been angrier in this film in order to compete with the increasingly violent nature of his fellow slasher Jason Voorhees. However, whatever else was different about Michael Myers in HalloweeN 5 were things that were not related to character development (e.g. Michael’s new bodybuilder’s physique, his new big neck mask, his new coveralls, and the strange way he held his knife). 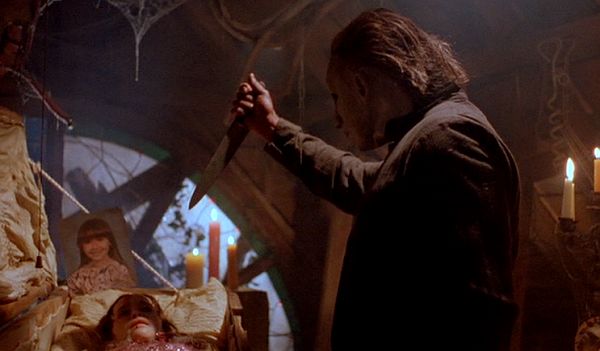 So, when Michael Myers was shown crying, it was a serious WTF moment. Not only was Myers in an attic full of corpses and candles, he was about to plunge his knife into a little kid. And the filmmakers wanted us to feel sorry for his tormented existence? Right. Danielle Harris’ performance gave that scene way more gravitas than it deserved.